This article documents an April Fools' joke.
This feature was exclusively part of a joke version and is not currently planned for addition to regular Minecraft.
It is documented here on the wiki due to being officially-released content by Mojang Studios, even if not present in a final version.
Diamond Chicken 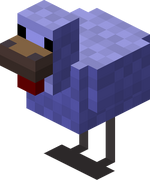 Diamond chickens were a rare variant of chicken present in the April Fool's Java Edition 2.0.

Diamond chickens spawned under normal chicken spawning conditions, but not as commonly.[check the code]

As chickens were modified in 2.0 to display neutral behavior, diamond chickens are also neutral. They also explode when aggravated.

Diamond chickens lay diamonds and lapis lazuli instead of eggs like normal chickens.

Diamond chickens share their ID with chickens, with an additional DiamondChicken boolean to determine if a specified chicken is a diamond chicken.