A detector rail is a block that can transport minecarts and can be used as a switchable redstone power source.

An detector rail also drops as an item when the block beneath it is removed, water or lava flows over it,‌‌[Java Edition only] or a piston moves it into a space with no floor below it.

A detector rail can be used as a rail that can detect when minecarts are on it or how full container minecarts on it are.

To place a detector rail, use the Place Block control on the face of a block adjacent to the destination space.

A detector rail can be attached to:

Mobs avoid walking across a detector rail (or other rails), but can be pushed onto them.

It cannot be placed suspended in midair, even with commands, which is not unintentional.[1]

Example for signal strength of a full minecart (27 stacks) and a half-full one (14 stacks)
See also: Redstone circuit 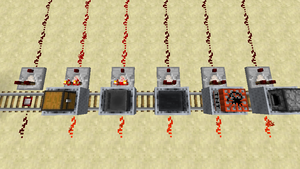 A comparator can read the contents of a minecart with hopper or with chest on a detector rail through a solid opaque block, as it can with other container blocks.

Issues relating to "Detector Rail" are maintained on the bug tracker. Report issues there.