This page describes content that may be included in a future update for Java Edition.
This content has appeared in 1.17 development versions, but the full update containing it has not been released yet.
Deepslate 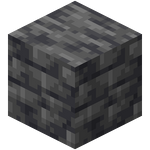 Deepslate is a stone variant found deep underground in the Overworld that functions similar to regular stone.

Deepslate can be obtained only by mining it using a pickaxe with the Silk Touch enchantment, otherwise it drops cobbled deepslate. If broken with any other tool, it drops nothing.

Deepslate makes up the majority of the solid blocks generated below y = 0 in the Overworld. Stone is gradually replaced from y = 0 to y = -7 until completely replaced by deepslate.

When the world is generating new chunks, some deepslate becomes mineral veins, and caverns and other underground structures generate at the deepslate level.

Deepslate can be used for decoration.

Deepslate can be mined using a pickaxe without the Silk Touch enchantment to obtain cobbled deepslate.

Issues relating to "Deepslate" are maintained on the bug tracker. Report issues there.