This article is about the dead bush. For the Legacy Console Edition exclusive feature, see shrub.
Dead Bush 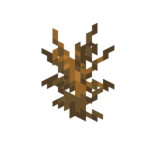 Dead bushes are transparent blocks in the form of an aesthetic plant.

Dead bushes drop 0–2 sticks when broken without shears. When shears are used, a dead bush drops itself. If the block below the dead bush is removed, the bush simply disappears without dropping anything.

Dead bushes can be found inside flower pots inside some desert village houses.

Dead bushes can be used for aesthetic decoration, as a source of sticks and a fuel source. They can be placed on any kind of sand, terracotta, dirt or podzol, but not on mycelium or grass blocks. They can also be placed in flower pots. Also, they do not spread, and cannot be grown using bone meal.

Dead bushes can be used as fuel, smelting one item per dead bush.