Since the beginning of the development of Pocket Edition and Bedrock Edition, there have been a number of features that were removed from the game. These features may have been replaced, or a developer decided against the feature later on.

When a splash is removed, the line it occupied in splashes.json is deleted, meaning the line number of all subsequent splashes lowers by one.

Prior to Bedrock Edition beta 1.2.13.8 the player could sprint on water. This feature was removed soon after due to the new swimming mechanic.

As the old UI was removed, text information showed in that UI was also removed.

Before Bedrock Edition 1.4.0, wearing an enchanted helmet with the Respiration enchantment would boost underwater vision. The higher the level, the better it improved the player's vision. This enhanced vision has since been removed, due to the water texture being changed and because the player can now see clearly underwater without effects or enchantments. However, Night Vision is still required for better visibility. Also, the enhanced underwater vision is still obtainable from other methods, such as Conduit Power from conduits added in Bedrock Edition 1.5.0.

However, the store was replaced by Marketplace in Pocket Edition 1.1.0. This includes content created by the community, purchased using 'Minecoins'. Content is no longer available offline.

In Bedrock Edition 1.12.0, The Store button Was Renamed To Marketplace.

In older versions, tilling a grass block with a hoe had a small chance of dropping wheat seeds.

Roses in Pi Edition have an exclusive cyan texture. This is commonly referred to as the cyan flower.

In a video preview of Pocket Edition on the Xperia PLAY, a cyan rose was visible.[1] Jeb stated that they exist as a replacement for Java Edition roses, following some hardware problems.

Cyan roses are not planned to be added in the PC version of Minecraft.[2], and they were replaced by Poppies in Pocket Edition Alpha 0.9.0. However, Johan said it may return.[3]

They served absolutely no function but merely decoration. They cannot be used in crafting in any way.

Prior to Pocket Edition Alpha 0.12.1, tapping the core activated the reactor, sending the client message "Active!". Immediately after activation, a massive 35×17×17 structure of netherrack with multiple rooms, unofficially referred to as a "Nether Spire",[4] was generated around the reactor. The reactor was constructed by placing gold blocks, cobblestone, and a nether reactor core in the 3×3×3 arrangement shown below. The Nether Reactor's functions were removed after the Nether was added into the Pocket Edition.

Prior to Alpha 0.13.0 build 1, any placed powered rail would be always active. This was because redstone mechanics did not exist at the time.

In Pocket Edition Alpha 0.8.0 build 3, cocoa beans were added with their own exclusive recipe. Since Alpha 0.9.0 build 1, cocoa beans were made able to be obtained with cocoa pods. In the Alpha 0.16.0 official release, the cocoa bean's crafting recipe was removed.

The recipe was removed because cocoa beans could be obtained from cocoa pods. It was reported by a user in the bug tracker and was confirmed as a bug.[5]

However, enchanted golden apples may still be obtained in other ways.

The recipe of crafting the red bed with any wool color was removed in Pocket Edition alpha 1.1.0.0 with the addition of multiple colored beds. This recipe was removed because prior to alpha 1.1.0.0, only red beds existed in the game, and now it is required to have matching red wool to craft a red bed.

In Alpha 0.13.0 build 1, the crafting recipe for the stonecutter was removed, making it only available in creative mode

In Bedrock Edition beta 1.10.0.3, the stonecutter was removed and replaced with the new stonecutter.

The nether reactor core's recipe was made no longer available and it no longer appears in the creative inventory and will drop its ingredients when broken.

In older versions, stone bricks can be crafted using andesite, granite, diorite, and their polished variants. However, in 1.9, stone brick is changed to crafted with stone only.

In older versions, redstone repeaters can be crafted using andesite, granite, diorite, and their polished variants. However, the recipe then changed to use only stone.

In older versions, redstone comparators could be crafted using andesite, granite, diorite, and their polished variants. However, the recipe then changed to require stone.

The reason for the removal of the red dye recipe is unknown. It may have been because of the name being "rose red", implying it comes from roses instead of mushrooms, although the name is changed to "red dye" in 1.8.0.

Several features intended to be exclusive to Education Edition were accidentally added in the first build of Pocket Edition Alpha 0.16.0, and were removed shortly after. Among these features were the Allow and deny blocks, the chalkboard, the border block and the portfolio item.

Chickens spawning in the Nether[edit]

Ocelots were tamable by feeding them raw cod or raw salmon to transform them into cats. However, in Beta 1.8.0.8, ocelots and cats became separate mobs and giving them any type of fish will just breed them and gain the trust of the player and increase baby ocelot growth speed by 10% rather than taming them. In 1.14.0, ocelots are leashable again.

The magma cube previously took damage when they became wet, as the vanilla behavior pack had the magma cube's behavior "magma_cube_hurt_when_wet": set to true. Magma cubes would also take damage if exposed to sunlight or moonlight during rain and while in the water. However, as of an unknown build in 1.1, this feature was considered a bug and removed, as its vanilla behavior of taking damage when wet was set to false again.

When the horse was added, it used an older model, which was replaced with a newer model in 1.2.6. In the earlier versions of Alpha 0.15.0 builds, Horses could be tamed by feeding them food, although this feature was removed and now the player is required to mount the horse to tame it.

When the dolphin was added in Bedrock Edition 1.4.0 beta 1.2.20.1, it was breedable by feeding them raw cod or raw salmon. However, in beta 1.5.0.0, feeding a dolphin with raw fish will make it swim toward the nearest ocean ruins or shipwreck. Baby dolphins can only spawn naturally in the ocean and not via breeding.

Villager running away from monsters[edit]

At an earlier version where villagers were added to the game, they will avoid any type of monster, including neutral monsters such as endermen and spiders, however, in Pocket Edition Alpha 0.12.0 this feature was removed as villagers only avoid zombie variants, and illagers in Pocket Edition 1.1.

In earlier versions of Pocket Edition Alpha, all baby versions of mobs used the same sounds as their adult counterparts, rather than the high-pitched versions that they use now.

In Pocket Edition Alpha, if a mob that is set on fire attacks to another mob, the mob would always transfer its burning effect to the mob it attacked. For mobs that could fire a projectile, such as the Snow Golem, its projectile would always be set on fire. However, as of an unknown update, burning attacks now depend on regional difficulty.

Mobs always drop their armor but not items[edit]

In Pocket Edition Alpha 0.12.1, mobs could spawn with equipment, but if the mob was killed, it would always drop their armor, even when killed from cacti, falling, drowning, or otherwise dying. However they would never drop an item held in their hand (An exception was the Witch, which would always drop whichever potion it was drinking upon death). As of 1.2.0, this feature was removed, and now a mob that had a weapon and/or armor equipped will drop any of its equipped items when killed by a player, and only at an 8.5% chance for each item. (this includes potions dropped by Witches).

All entities can breathe in lava[edit]

Previously, any entities under the Fire Resistance effect could stay submerged under lava without suffocation. As of an unknown update, this feature was removed and only some mobs, such as the Blaze and the Ghast, are able to breathe in lava. Now, the player and most other mobs require either the Water Breathing or Conduit Power status effects in order to breathe in lava.

In beta 1.2.14.2 guardians are hostile toward cod, salmon, pufferfish, and tropical fish. but as of an unknown update, this feature has been removed shortly in the 1.4.0 betas due to a performance issue with low-end devices when the player is near a monument.

For testing purposes, some particles which couldn't generate naturally were added in several versions.[6] However this particles have been moved in current version.

Prior to 0.12.1 build 1, eating food would heal the player's health while it was lost. However, with the addition of the hunger bar, this feature was removed.

Before 0.12.1 build 1, eating pufferfish would not inflict the poison status effect.

Biomes prior to Pocket Edition Alpha 0.9.0

Before Alpha 0.9.0, many biomes existed which most of them got removed. Biomes prior to Alpha 0.9.0 are identical to Java Edition's biomes between the Halloween Update and the Adventure Update, as well as Legacy Console Edition’s biomes before TU5.

Before Bedrock Edition 1.2.0, extreme hills and its variant did not generate on top of snow above Y layer 90.

Before Pocket Edition Alpha 0.11.0 build 1, villages used gravel paths as roads; however, this was changed and grass paths were added as village roads instead.

Prior to Pocket Edition Alpha 0.15.0 build 1, villages that would generate in savannah biomes used oak wood, oak wood planks, oak fences, and oak stairs, but this village was later replaced with the acacia village.

The "cold-en" oak, or winter oak, was a tree formed by a very rare glitch in older versions of Pocket Edition prior to Alpha 0.9.0. It caused a small tree with a leaf arrangement that was the same as that of a small oak or birch tree that is generated on the border of a forest and a snowy area (one of which is usually mountainous). It was composed with spruce leaves and spruce logs (seen in both the lite and newer versions prior to Alpha 0.9.0) or rarely oak logs (paid only).

At the same time that cold-en oak trees existed, oak trees at the time would only generate with 2 logs in a canopy, rather than 3.

In Pocket Edition Alpha 0.15.0 build 1, strongholds only generated one room, which was a spiral staircase room. No other room could generate, including the end portal room, which made it impossible to obtain a loot chest in a stronghold. There were 2 types of this stronghold:

When abandoned mineshafts were added to Pocket Edition in Alpha 0.9.0 build 1, it would generate a spawner with a spider inside of it instead of a cave spider, which was because cave spiders didn’t exist in Pocket Edition yet. 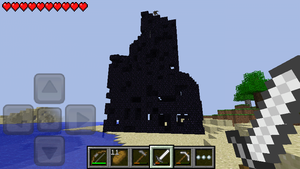 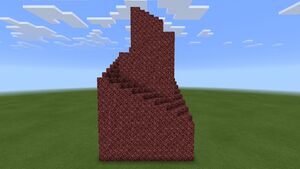 Nether Spire was a huge structure consisting of netherrack that generated when a nether reactor core activated. It would replace many blocks and started spawning multiple rare items and zombie pigmen, but only if the player's difficulty was set higher than the peaceful mode. When the nether reactor core stopped working, all the reactor blocks that had already become glowing obsidian transformed into normal obsidian. The Nether Spire structure would start to break, causing holes to form on the spire. It also caused the time to be set to night. The Nether Spire consisted of many floors and would destroy many blocks in its path. If the Nether Spire generated in a high place, the upper part of the nether spire would not generate properly and become cut off due to the height limit, which was only 128 blocks high at the time.

The texture of the crying obsidian used to exist in the Pocket Edition in terrain.png, but it was removed in Alpha 0.8.0.[verify]