From Minecraft Wiki
Jump to: navigation, search
Not to be confused with Glowing Obsidian.
Crying Obsidian 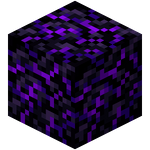 Crying obsidian is a luminous variant of obsidian that can be used to craft a respawn anchor and produces purple particles when placed.

Crying obsidian can be harvested only with a diamond pickaxe or a netherite pickaxe.

Crying obsidian can generate as part of ruined portals.

Similarly to obsidian, crying obsidian is a resilient building block. It has a blast resistance of 1,200. In addition, it cannot be pushed by pistons or destroyed by the ender dragon. It is used to make respawn anchors, a block that has the function of letting players respawn in the Nether.

When placed, crying obsidian occasionally produces purple dripping particles, as if it is "crying". These droplets have no purpose, cannot be collected with a bottle and are purely decorational.

Unlike obsidian, crying obsidian cannot be used as a nether portal frame.[1]

Crying obsidian gives off a light level of 10, which does not melt snow or ice. Its blast resistance distinguishes it from other light-emitting blocks.