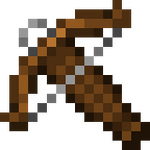 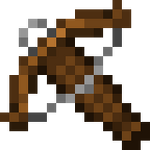 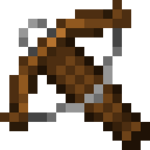 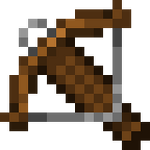 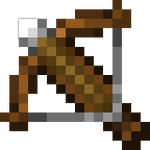 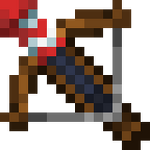 A crossbow is a ranged weapon similar to a bow that uses arrows or fireworks as ammunition.

Piglins have a chance of wielding a crossbow upon spawning, and they also have a small chance (8.5%) of dropping a loaded or unloaded crossbow of random durability when killed; this rate increases by 1% per level of Looting: 9.5% with Looting I, 10.5% with Looting II and 11.5% with Looting III. It can rarely (10% chance) be enchanted at level 5–19 regardless of being enchanted when spawned.

Master-level Fletcher villagers have a 1⁄16 (6.25%) chance of selling an enchanted crossbow for 8 emeralds.‌[Bedrock Edition only]

Master-level Fletcher villagers have 2⁄3 chance of selling an enchanted crossbow for 7-22 emeralds.‌[Java Edition only] 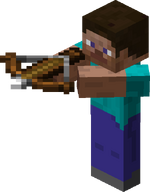 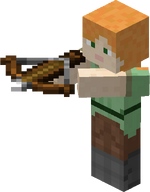 Despite using iron in their crafting recipe, crossbows cannot be smelted into iron nuggets.[1]

Charging and shooting the crossbow in Bedrock Edition.

Crossbows are similar to bows, but take longer to load and are slightly more powerful, shooting farther with slightly higher accuracy. Load them by using them, which makes the player move at sneak speed. Unlike bows, the arrow or firework rocket can be fired only after it is fully charged. At this point, it must be used once more to fire its bolt.

Once it has reached full charge, the player's speed returns to normal. After that, shooting a charged crossbow does not delay any of the player's current action like sprinting or swimming.

The crossbow can even be placed in another inventory slot or into an item frame without the arrow or firework rocket being unloaded or fired. A charged crossbow also remains charged after enchanting it with an enchantment table or with an anvil.

In order to use the crossbow, at least one arrow or firework rocket must be present in the inventory. The player can choose which type of arrow to fire based on its location in their inventory:

The player can load either an arrow (tipped still works) or a firework of any color.

Endermen teleport away from projectile paths, so they cannot be hit with crossbow arrows. However, they can still get harmed by firework rocket explosions, if they can't detect the firework rocket.

Firework rockets can be fired by loading the crossbow while holding the rockets in the off-hand. They fly at 32 m/s. Firework rockets with higher flight durations have a longer time before they explode and therefore travel farther. Firing a firework rocket uses 3 durability points per shot.

points of damage, for a maximum of 11

Multishot and Piercing are mutually exclusive. Normal methods of enchanting allow only one of them to be applied to a crossbow.

Crossbows can receive 3 unique enchantments, and have a base enchantability of 1. Enchantments specific to crossbows include Quick Charge, Multishot and Piercing.

Crossbows can be used as fuel in furnaces, smelting 1.5 items per crossbow.

The sound table below uses messy wikicode that should be cleaned up for readability.

Issues relating to "Crossbow" are maintained on the bug tracker. Report issues there.