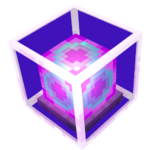 The Corrupted Beacon is an artifact that fires a high-powered beam that continuously damages mobs.

It requires souls and is consumed up quickly. It is great at killing early game bosses.

With the maximum amount of souls gathered, being 50, it can be fired for four seconds in total, using about 12.5 souls per second.

Each tick of damage deals around 10% of the damage per second value.

The beam fired has a massive range that exceeds the boundaries of the screen.

Equipment that increases Artifact Damage, such as Souldancer Robe, Splendid Robe, and Cave Crawler affect the amount of damage dealt.