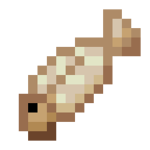 This article is about cod in its food form, cooked. For the mob form of cod, see Cod. For other uses, see Fish.

Guardians and elder guardians have a 40% and 50% chance to drop raw cod when killed. A guardian/elder guardian drops cooked cod if killed while on fire.‌[Java Edition only]

Cod always drops 1 raw cod when killed. If it is killed on fire, it drops cooked cod instead.‌[Java Edition only]

When killed, dolphins drop 0–1 cooked cod if killed while on fire. The maximum amount is increased by 1 per level of Looting, for a maximum of 0-4 with Looting III.

Cooked cod can be obtained by cooking raw cod in a furnace, smoker, or campfire.

Novice-level Fisherman villagers have a 50% chance to sell 6 cooked cod for 6 raw cod and 1 emerald.

In Bedrock Edition, cooked cod can be used to feed a wolf not at full health, healing by 5

. However, unlike other wolf food, cooked cod cannot be used to speed up the growth of baby wolves nor used to breed them.

Issues relating to "Cooked Cod" are maintained on the bug tracker. Report issues there.