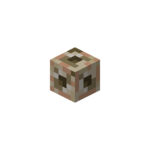 A conduit is a beacon-like block that provides Conduit Power and attacks hostile mobs underwater.

Conduits drop as an item when broken with any tool or by hand, but a pickaxe is the fastest way to break it.

in Java Edition, conduits drop as an item when broken with any tool or by hand.

in Bedrock Edition, conduits drop as an item when broken with any tool or by hand, but a pickaxe is the fastest way to break it.

Schematic of a conduit in an activation frame.
Click the scale on the right to view the layers.
The conduit and water are required. The frame
must include 16-42 blocks of prismarine, dark
prismarine, sea lanterns, and/or prismarine
bricks. Unused frame-blocks and empty spaces
can be anything.

When activated, conduits give the "Conduit Power" effect to all players in contact with rain or water, within a spherical range of 32-96 blocks. This effect stops the breath meter from decreasing, gives underwater night vision and increases underwater mining speed (slower than above water mining). Conduits also damage any hostile mobs, like drowned and guardians, within a range of 8 blocks of the conduit. Conduits can be activated in any biome and at any height or depth.

To activate, a conduit needs to be in the center of a 3×3×3 volume of water (source blocks, flowing water, and/or waterlogged blocks), which itself must be enclosed within an activation frame. The frame is built out of blocks in three 5×5 open squares centered on the conduit, one around each axis. Only prismarine, dark prismarine, prismarine bricks, and sea lantern blocks in the frame contribute to activation. A minimum of 16 blocks are required and produce an effective range of 32 blocks. Prismarine-type slabs (including double slabs), stairs, and walls cannot be used to activate the conduit.[2]

The effective radius of the conduit is 16 blocks for every seven blocks in the frame, though the effect does not activate until the minimum of 16 blocks is included in the build. Thus, it extends to 48 at 21 blocks, 64 at 28 blocks, 80 at 35 blocks, and 96 with a complete frame of 42 blocks. A complete frame also carries the additional advantage of attacking hostile mobs within 8 blocks of the conduit by 4

every 2 seconds, if they are in contact with water or rain.

Other blocks used as part of the frame (including prismarine stairs, slabs, double slabs, and walls) have no effect on activation. Any blocks outside the frame but within the 5×5×5 cube that encompasses it likewise have no effect.

Conduits emit a light level of 15, the brightest light level in the game, whether activated or not; including on land.

A conduit has a block entity associated with it that holds additional data about the block.

Issues relating to "Conduit" are maintained on the bug tracker. Report issues there.