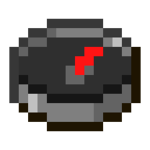 Compasses are an item used to point to the world spawn. They are crafted using 4 iron ingots and one piece of redstone dust.

Compasses can be found in 7.7% of shipwreck map chests, 26.3% of village cartographer chests, and 10.9% of stronghold library chests, all in stacks of 1.

In Bedrock Edition, they can be found in 10.5% of stronghold library chests in stacks of 1.

Expert-level librarian villagers have a 50% chance to sell a single compass for 4 emeralds.‌[Java Edition only]

Expert-level librarian villagers have a 1⁄3 chance to sell a single compass for 4 emeralds.‌[Bedrock Edition only]

The compass needle points toward the world spawn point; more specifically, it will always point towards the northwest corner of the block whose coordinates are set as the world spawn. The compass points to spawn when viewed in any way, including as a dropped item, in a player's hand, in an inventory or the crafting table, or in an item frame. The compass shown on the topmost tab of the recipe book also points to spawn. The direction the needle points is relative to the player who is viewing it.

In the Nether or the End, the compass' needle spins and points in random directions.

A single compass can be sold to a journeyman-level cartographer villager for 1 emerald.‌[Java Edition only]

A single compass can be sold to an expert-level cartographer villager for 1 emerald as their sixth trade.‌[Bedrock Edition only]

A compass is also part of the cost of explorer maps:

An ocean explorer map or a woodland explorer map can be bought from a journeyman-level cartographer for 12 emeralds and a compass, as part of their fifth trade.‌[Bedrock Edition only]

Issues relating to "Compass" are maintained on the bug tracker. Report issues there.