A command block is a block that can execute commands. Because it cannot be obtained in Survival mode without cheats, it is primarily used on multiplayer servers and in custom maps.

Command blocks are not available in the Creative inventory. It can either be obtained by using the pick block control, or by using various commands, such as /give @s command_block, or /setblock ~ ~ ~ minecraft:command_block.

Just like other blocks that can store NBT data, using pick block + CTRL copies the command and options inside the command block. This allows it to be placed elsewhere without having to re-enter the data inside.

Command blocks also cannot be broken in Survival mode without operator permissions, are not flammable, cannot be moved by pistons, and have the same blast resistance as bedrock.

A command block can execute commands when activated by redstone power. It always has all permissions, so it can be used to allow a specific use of a command by players who can't use that command in general (for example, allowing anyone to obtain a specific item with /give without allowing everyone to /give themselves whatever they want). 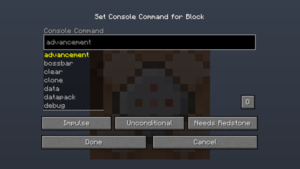 Commands can be entered in the top text pane. The text limit for commands in a command block is 32,500 characters, but the text pane can show only a small portion of this amount at a time. Press Tab ↹ to complete words or cycle through options.

Commands in a command block do not need to be prefixed with the forward slash (/) as they do in the chat window, but doing so still works.

Below the console command text pane are some reminder tips about how to use target selectors.

The bottom text pane displays the output message (success or failure) of the last executed command (initially blank). Its text is not editable.

A button to the right of the Previous Output text pane specifies whether the last output should be stored and displayed. It shows O (the default) when the output should be stored and X when the output should not be stored. A command block that's tracking its output while executing its command causes a block update, and when you have 64 of those command blocks tracking their output while executing their command sharing the same chunk, it then causes 1 or more chunk updates because 64 block updates in 1 chunk cause one or more chunk updates. If the amount of chunk updates is high enough, then it can cause fps drops for players if they're receiving the chunk updates. To avoid this, simply have all of your command blocks not track their output at all, except for temporary debugging purposes. 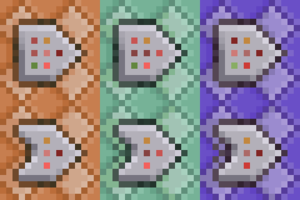 Click the "Cancel" button or Esc to leave the command block GUI without saving any changes.

Command blocks are redstone mechanisms and can be activated by:

In addition, when a command block is cloned by a command to a powered location, the new command block executes its command only if the original has never been activated (visible in the F3 debug screen as "triggered").

Unlike all other redstone components, except the note block, a command block can be activated every game tick (20 times per second, barring lag). However, if it's set to Needs Redstone, then activating it two game ticks in a row requires that it transition from powered to unpowered and back during the same tick (for example, with a setblock clock).

A command block in "Always Active" mode is always activated. The default state is "Needs Redstone", which means that it runs only when powered.

Chained command blocks execute in the same game tick in the order they are chained. Chained execution cannot be passed to a command block that has already executed in that game tick (loops execute only once).

When activated, a command block can produce multiple types of output:

A command block can power a redstone comparator facing away from it (possibly separated by a block) with a signal strength specific to the last executed command (for example, the number of players affected by the command).

The signal strength always reflects the last command executed, even after the command block is deactivated.

The output message describes the success or failure of the executed command, and may be written to multiple destinations:

Chat: The output message is written to the chat text in singleplayer mode, or broadcast to all other ops in multiplayer mode, unless it has been suppressed with /gamerule commandBlockOutput false. Some commands may write additional text to the chat as their normal function, which won't be suppressed (for example, the /say command writes a message to the chat of all players), separate from the output message. Chat messages that would usually be prefaced by a player's name (such as from the /me, /say and /tell commands) use @ as the player name. If the command block had been named in an anvil before placement, that name is used instead.

Logs: The output message is written to multiplayer server logs unless it has been suppressed with /gamerule logAdminCommands false.

The objectives to be used can be specified by running the /stats command or by modifying the command block's NBT data directly with the /blockdata command.

The following commands are usable but with limited functionality (their output displays only in the command block's Previous Output pane rather than being displayed in the chat): /help, /seed, /list, /scoreboard objectives, /scoreboard players, and /team list.

The following commands use the command block's name (defaults to @) in their output: /me, /say, and /tell. Use an anvil to change the name.

Running "Searge" as the command in the command block without a preceding "/" now set the previous output to "#itzlipofutzli". Additionally, if /help is run via command block, it gives various messages prefixed with "Searge says: ". This no longer works on Bedrock Edition as of an unknown update.

A command block has a block entity associated with it that holds additional data about the block.

Note: This video was made before 1.7. Since 1.7, the player can get a command block with '/give @p minecraft:command_block'. In addition, this video does not mention command block facing, chain and repeat command blocks and the texture of the command block has been changed.

Issues relating to "Command Block" are maintained on the bug tracker. Report issues there.