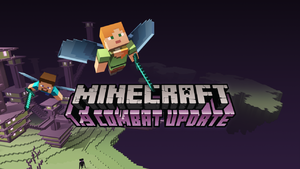 Image for the Combat Update released by Mojang

For a guide about all the additions and changes in this update, see Java Edition guides/Combat Update.

The Combat Update is the name for Java Edition version 1.9, a major update released on Monday, February 29, 2016.[1] This update overhauled the combat system, among other additions and changes.

The official name for the update, the Combat Update,[2] was discovered on April 1, 2015 by Reddit user 3dDeters (and several others independently) who found a QR code hidden in the snow falling pattern of the April Fools 15w14a snapshot.[3]

Development on the Combat Update began at least a month before the Bountiful Update was released.[4][5] The development period was over twice as long as the development period for 1.8 at 576 days; 2015 became the first year where a major update to Minecraft was not released. Snapshots began the day after 1.8.8 was released. 56 development snapshots were released, from 15w31a to 16w07b, making it the update with the most snapshots so far. The time between releases of 1.8 and 1.9 represent the longest time span between major updates, at 545 days. Fifteen iterations of the launcher were released during this period, from 1.5.2 to 1.6.59. 1.8.9 was also released during this period.

The development team called the release feature-complete by the end of October 2015, and started a lengthy period of gameplay balancing and bug-fixing[6]. They later announced that 1.9 would not be released in 2015, as the developers "want to fix more bugs before release, and keep the game stable over the holidays".[7]