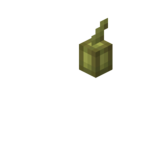 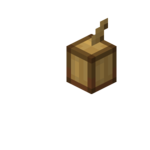 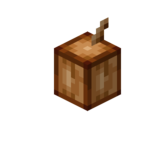 Cocoa beans are a food ingredient obtained from cocoa that can be used to craft cookies and brown dye.

Cocoa pods can be mined with any tool, but axes are the quickest.

The block itself is a technical block that cannot be obtained as an item, instead as cocoa beans,‌[Java Edition only] but they can be obtained by inventory editing or add-ons in Bedrock Edition.

Cocoa beans come from cocoa pods, which are found on the trunks of normal-sized naturally-generated jungle trees in jungle biomes. Placing a cocoa bean on the side of jungle log plants a new cocoa pod. (The log does not need to be attached to a tree).

Cocoa has three stages of growth. During its first, the pod is small and green. In the second stage, the plant is bigger and colored tan. In its last stage, the pod is even bigger, and orange-brown. When destroyed in the first two stages, the pod yields only one cocoa bean. When destroyed in the third stage, it gives two or three cocoa beans. Bone meal can be used to force the cocoa pod forward by one growth stage. Cocoa pods "pop" and drop their beans when struck by flowing water,‌[Java Edition only] pushed by a piston, or if their log is removed by any means.

In Bedrock Edition, cocoa beans can be found in 40.0% of bonus chests in stacks of 1–2.

Wandering traders sell 3 cocoa beans for an emerald‌[Bedrock Edition only].

Cocoa bean can be caught when fishing in jungle as junk item.

In Bedrock Edition, cocoa beans can be also used in banner patterns:

In Bedrock and Education editions, cocoa beans can be:

Placing cocoa beans into a composter has a 65% chance of raising the compost level by 1.

In Bedrock Edition, cocoa beans have the ID name dye, with a data value of 3.

Note: This video is outdated, and contains a mis-statement. The video states that beans can be found in "bonus chests"; they were actually found in dungeon chests. Cocoa beans were also removed from dungeon chests in version Java Edition 1.6.1.

Issues relating to "Cocoa Beans" are maintained on the bug tracker. Report issues there.