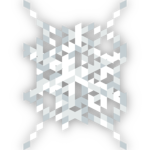 A cobweb is a block that slows down entity movements.

Cobwebs can be obtained by clipping them with shears A cobweb drops one piece of string if broken with a sword. It drops nothing when broken using anything else.

Mobs can spawn inside of cobwebs, in which case they do not catch fire if they are caught in a cobweb. Cobwebs also diffuse sky light.

They can be useful in PvP servers, where a player can quickly erect a barrier of cobwebs that can trap players, or force them to destroy the cobwebs. They are also useful in traps that are deliberately intended to troll players, such as a long pitfall with cobwebs and lava at the bottom.

Cobwebs can be obtained by clipping into them with shears. A cobweb also drops itself if broken with a sword enchanted with Silk Touch.[a] A cobweb drops one piece of string if broken with a non-Silk Touch sword, or if water touches or flows over it, or a piston pushes it. It drops nothing when broken using anything else. 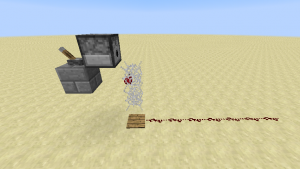 2 cobwebs delay for around a minute

Cobwebs can be used as a delaying mechanism in a redstone circuit, for example, to delay an item falling on a pressure plate or into a hopper.

All mobs except for spiders and cave spiders experience slow movement through a cobweb. A mob falling through a cobweb takes 13 seconds to move down 1 block. A cobweb can partially stop blast damage if a player and the TNT/creeper/etc. are both caught in the cobweb. The slowing effect of the cobweb increases if it is placed on ice. The slowest a player can move in vanilla Minecraft without commands or other third-party tools is by placing cobwebs on Blue Ice, sneaking, drinking a level IV Turtle Master Potion, and blocking, which causes the player come to a near-total standstill, moving only a single block every few minutes.

A cobweb affects the player's movement abilities, as well. While in contact with it, the player can move at a speed of about 15% of the normal walking speed. Additionally, jumping vibrates the player akin to jumping in a 2-block-high space.‌[Java Edition only] A cobweb also limits the rate at which a player can break blocks. Like water, falling into a cobweb prevents a player from taking fall damage, meaning a fatal fall can be mitigated with cobwebs. Attacking while falling through cobwebs counts as a critical hit, the same as when falling after a jump.

Items thrown into a cobweb are slowed and fall through it after a maximum of about 24 seconds depending on where it enters. They do not merge with other items of the same type thrown on the ground.

Cobwebs have different effects on moving entities. A falling block that falls or is shot into a cobweb slows down, then drops as an item after about 4 seconds.‌[Java Edition only] An arrow shot at a cobweb passes through without being slowed.

A minecart with no players in it takes about 9 seconds to fall through a cobweb if a rail is placed directly under the cobweb, however, if there is air between the cobweb and the rail, the minecart takes about 34 seconds to fall. Every extra cobweb added gives an additional 25 seconds of falling time. Players are unaffected by cobwebs when in a minecart unless they come into direct contact.

Issues relating to "Cobweb" are maintained on the bug tracker. Report issues there.