From Minecraft Wiki
Jump to: navigation, search
Not to be confused with Dirt.
Coarse Dirt 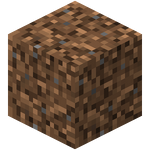 Coarse dirt is a variation of dirt on which grass blocks cannot spread.

Coarse dirt has the ability to grow saplings, sugar canes, mushrooms, bamboo, and sweet berries which can be planted directly under appropriate conditions.

Neither mycelium nor grass can spread onto coarse dirt.

Coarse dirt can be tilled to become dirt and tilled again to become farmland.

Issues relating to "Coarse Dirt" are maintained on the bug tracker. Report issues there.