This article is about the mineral block. For the ore, see Coal Ore. For the item, see Coal.
Block of Coal 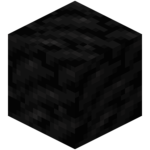 A block of coal is a mineral block that can also be used as a fuel.

Blocks of coal can be used as fuel in a furnace. One block of coal lasts 800 seconds (16000 ticks), which smelts 80 items. This is ten times the duration of a single piece of coal and 11⁄9 times as efficient (+11.11%) as nine individual pieces of coal- which would only smelt 72 items.