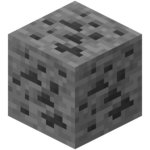 This article is about the ore. For the item, see Coal. For the mineral block, see Block of Coal.

Coal ore is a mineral block that drops coal when mined.

Coal ore can generate in the Overworld in the form of mineral veins. Coal ore attempts to generate 20 times per chunk in veins of size 17, from altitudes 0 to 128, in all biomes.

Issues relating to "Coal Ore" are maintained on the bug tracker. Report issues there.