From Minecraft Wiki
Jump to: navigation, search
This article is about the item. For the ore, see Coal Ore. For the mineral block, see Block of Coal. For the smelted wood, see Charcoal.
Coal 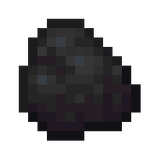 Coal is an item mainly obtained by harvesting coal ore blocks. It is used as fuel, for crafting torches and campfires, or for trading with villagers. Coal and charcoal cannot stack together.

Coal ore mined using a pickaxe drops 1 unit of coal. If the pickaxe is enchanted with Fortune, it may drop an extra unit per level of Fortune, up to a maximum of 4 with Fortune III.

When used in a furnace as a fuel, a piece of coal lasts 80 seconds (smelting up to 8 items), like charcoal. Coal used as fuel lasts more than 5 times longer than wood planks or wood logs used as fuel, being more efficient than any other use of wood for smelting in Java Edition, but outstripped by wooden slabs in Bedrock.

Coal and charcoal are also the only fuels accepted by powered minecarts. They provide approximately four minutes of transit each.

Novice-level fisherman villagers have a 50% chance to buy 10 coal for an emerald.

Issues relating to "Coal" are maintained on the bug tracker. Report issues there.