This article is about the mob. For item, see Tropical Fish (item). For other uses, see Fish.

In Java Edition, tropical fish spawn in lukewarm, warm and deep lukewarm oceans in groups of 8, with random patterns (see below).

Tropical fish cannot survive out of water. Outside of water, they flop around like guardians for a while until eventually they suffocate and die like squid. In Bedrock Edition, they rotate when flipping. Fish cannot swim or breathe in cauldron water.[1] 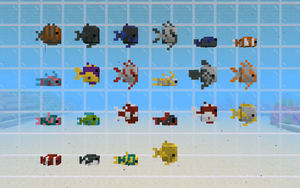 When tropical fish spawn in the wild, 90% of the time they appear as one of the 22 varieties seen on the right, and the other 10% of the time their patterns, size, and colors are completely random, drawn from any of 2 shapes, 15 colors, 6 patterns, and 15 colors for the pattern. The color black does not appear on any naturally-spawned tropical fish, since the eyes are usually hard to see.[2] These result in 2,700 naturally-occurring combinations.

Tropical fish have entity data associated with them that contains various properties.