This article is about the soft natural clay. For the item, see Clay Ball. For other uses, see Clay (disambiguation).
Clay 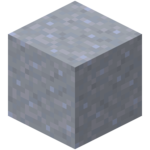 Clay is a block that can be found below water. It can be smelted to form terracotta.

Clay blocks can be mined with anything, but shovels are quickest. Destroying a clay block yields 4 clay balls. If broken with a tool enchanted with silk touch, it drops itself instead.

Destroying a clay block with a tool enchanted with fortune does not increase the amount of clay dropped.

Clay is commonly found at the bottoms of rivers and lakes in shallow, crystal-shaped patches, disregarding adjacency to other types of blocks. It can also be found commonly in swamps.

If a player has the Hero of the Village status effect, a mason villager might throw that player a clay block as a gift.‌[Java Edition only]

Clay can be placed under note blocks to produce flute sounds.‌[JE & BE only]

Issues relating to "Clay" are maintained on the bug tracker. Report issues there.