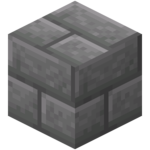 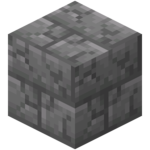 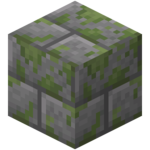 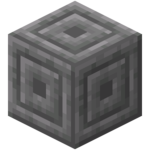 Regular, cracked, and mossy stone bricks generate as part of strongholds, making up most of the walls, ceilings, and floors.

Three blocks of chiseled stone bricks generate as part of each jungle temple.

Igloo basements are lined with stone brick, cracked at eye level and mossy at foot level, with chiseled brick along the floor and ceiling.

Stone bricks can be mined using any pickaxe. If mined without a pickaxe, they drop nothing.

Stone bricks can be found in 37.7% of village mason chests in stacks of 1.

Apprentice-level stone mason villagers sell 4 chiseled stone bricks for one emerald as part of their trades.‌[Java Edition only]

Apprentice-level stone mason villagers have a 25% chance to sell 4 chiseled stone bricks for one emerald as part of their trades.‌[Bedrock Edition only]

As stone bricks offer no real advantage over cobblestone, their main use is decoration.

Silverfish have the ability to enter and hide in any variant of stone bricks, creating an infested block of the corresponding type.

In Bedrock Edition, stone bricks use the following data values:

Issues relating to "Stone Bricks" are maintained on the bug tracker. Report issues there.