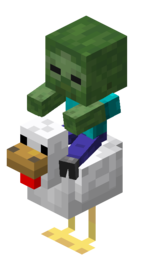 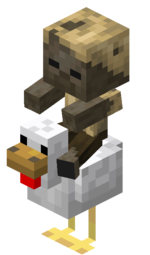 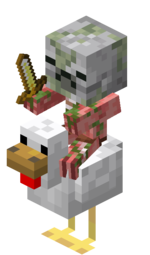 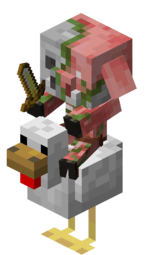 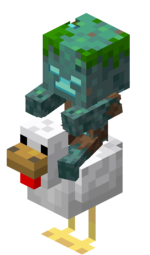 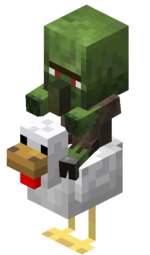 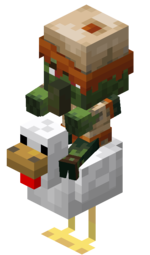 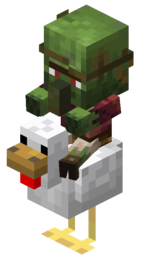 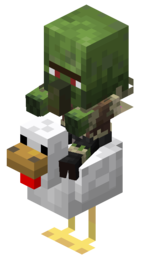 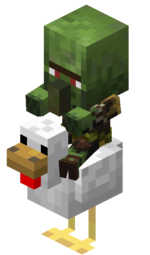 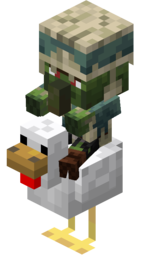 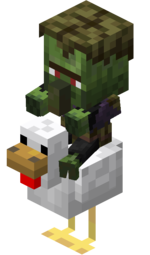 This article is about a rare variant of zombie. For other uses of the word "chicken", see Chicken (disambiguation). 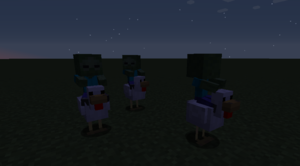 Each baby zombie, baby husk, baby zombie villager, baby zombie pigman, or baby drowned that spawns has a 5% chance to check for an existing chicken within a 10×6×10 box centered on the baby's spawn location and spawn riding one of those chickens if there are any. If it fails that 5% chance to check for existing chickens, there is an additional 5% chance of the baby zombie spawning mounted on a new chicken. In a chicken-free environment, each spawned zombie has a 0.25% chance of becoming a chicken jockey; if chickens are present, the chance increases to 0.4875%.

In Bedrock Edition, if a baby zombie has spawned on another type of mob (such as an Adult zombie), killing the chicken jockey's current ' mount ' in an area populated with chickens may result in the baby zombie jumping onto a chicken rather than attacking the player.

The baby drowned always drop their Nautilus Shell, but only when held in their offhand.

Baby zombie pigmen also have an 8.5% chance each of dropping their golden sword. The chance of each can be increased by 1% per level of Looting, up to 11.5% chance. It is usually badly damaged and may be enchanted.

If a baby zombie or zombie pigman wearing a pumpkin or jack o'lantern is killed using a tool enchanted with Looting, there is a chance equivalent to the level of Looting used to drop the pumpkin or jack o' lantern, up to a maximum of a 3% chance of a drop.

Note: This video is outdated, chicken jockeys no longer lay eggs as of 1.8. Also, husk jockeys and drowned jockeys were added in 1.10 and 1.13.