This article is about the hostile mob. For other uses, see Creeper (disambiguation).

Creepers are common green, deadly hostile mobs that silently approach players and explode shortly after coming within 3 blocks of their targets. Due to their distinctive appearance and high potential for killing unwary players as well as damaging the environment and players' constructions, creepers have become one of the icons of Minecraft, notorious both among players and non-players. Using a bow is the easiest way to kill the creeper without exploding. 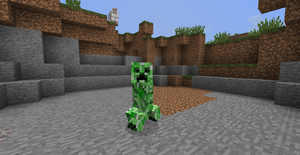 A creeper can jump down to a player if it can survive the fall. Creepers begin their 1.5 seconds explosion animation before falling, so an explosion occurs sooner after landing with higher falls.

Creepers can be forced to explode by using a flint and steel on one.

Creepers flee from ocelots and cats within a 6 block radius. A creeper that has begun its detonation does not flee unless the player leaves its blast radius.

In Java Edition, if a creeper is inflicted with a status effect, its explosion creates an area effect cloud of the effect.

Unlike other mobs, creepers are not targeted by tamed wolves, iron golems, or zoglins. However, they are still attacked by withers, snow golems, and vindicators named "Johnny". When hit by a stray projectile, a creeper retaliates if not already chasing a player.

A charged creeper is a more powerful variant of a creeper with a significantly increased explosion power.

Charged creepers have the same entity ID as normal creepers. The only difference is that the value of the boolean powered tag is set to 1 (true).

Creepers have entity data associated with them that contains various properties. 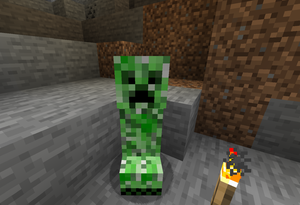 Creepers have a formidable reputation in the community because of their potential to hurt or kill even veteran players and destroy structures. Their distinct appearance and destructive abilities have made them a widely-recognizable Minecraft icon. Creepers are referenced in several of the items available at the Minecraft merchandise depot,[6] and have become an internet meme complete with fan art, web comic references, and demotivational posters. A central part of the meme is the creeper's unofficial catchphrase derived from the mob's tendency to sneak up on the player and hiss before detonating:

Moe Szyslak took the appearance of a creeper and exploded in the Simpsons’ home with in the 17th episode of season 25.