Armor tiers. From left (weakest) to right (strongest): no armor, leather, golden, chainmail, iron, diamond and netherite. (Note that the turtle shell are not pictured. The turtle shell is between iron and diamond, having equal armor points and greater durability than iron, while netherite has equal armor points and greater item durability than diamond.)

24 units of a given material make a full set of armor. A turtle shell is a helmet with no corresponding armor pieces. Chainmail armor cannot be crafted. Netherite armor only needs 4 units of Netherite ingots (16 netherite scraps and 16 gold ingots)

In order to have any protective effect, armor must be worn by the player. Helmets, chestplates, leggings and boots are equipped by placing them in the head, chest, legs and feet slots of the inventory next to the player's character, respectively. Armor can also be equipped simply by right clicking when held. If the respective slot already contains a piece of armor, they are swapped, and the original armor ends up in the player’s hand.‌[BE only]

The Turtle Shell is not part of a full set. However, its defense points match gold, chainmail and iron helmets, while its durability is between iron and diamond helmets.

Default color HEX code for leather armor is #A06540

Armor can further protect the player through a second attribute, generic.armorToughness. Armor toughness reduces how much attack damage against the user ignores their normal armor protection (essentially helps to protect against stronger attacks that would normally ignore/pierce some the normal armor protection). By default, only diamond and netherite provide toughness, with each piece granting +2 toughness for diamond and +3 for netherite‌[upcoming: JE 1.16] 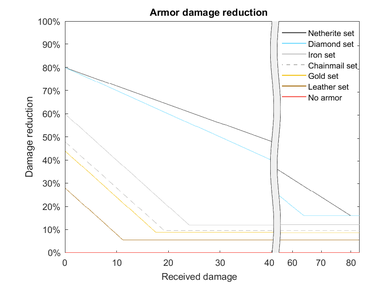 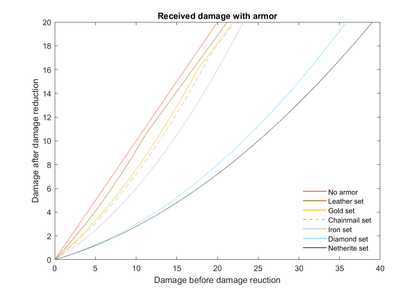 All other mobs can be equipped via commands, although the armor cannot be seen. It is also possible to equip villagers, pillagers, vindicators, and evokers with armor via dispensers.