Cauldrons can be mined using any pickaxe. If mined without a pickaxe, it drops nothing. When a cauldron is destroyed, its contents are lost.

A naturally occurring cauldron inside of a witch hut.

A single empty cauldron is generated in each swamp hut. In Bedrock Edition, the cauldrons generated there are 1⁄3 to 2⁄3 full of a random potion.

A cauldron 2⁄3 full of water is generated in each igloo basement.

Cauldrons can be found in a few rooms inside of woodland mansions.

A single filled cauldron can be found in plains village and desert village tannery houses.

A cauldron can be crafted from iron ingots.

Cauldrons can hold a variety of substances. Fluids they cannot hold include milk, honey and any food items which exist in bowls; namely mushroom stew, beetroot soup, rabbit stew and suspicious stew.

A cauldron with different water levels.

A cauldron slowly fills with water when rained upon, if starting empty or with some water. This happens randomly, at 5% of the rate in which snow accumulates on the ground during snowfall.

Water can be stored in a cauldron even in the Nether.

Water in a cauldron does not absorb explosion damage, make sounds and particles, absorb fall damage, does not damage an enderman, strider or blaze, and fish act as if there is no water inside it. Cauldrons do not deal drowning damage to mobs inside of them.

A cauldron placed below a down-facing pointed dripstone that has water placed a block above it will slowly fill up with water.‌[upcoming: JE 1.17] 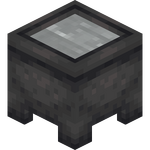 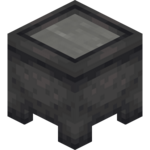 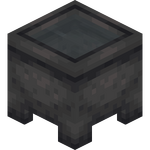 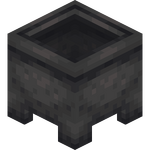 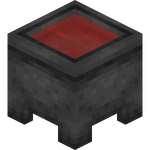 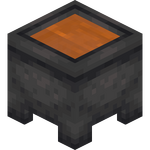 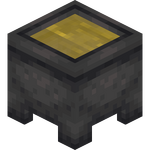 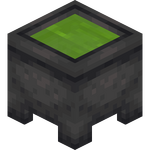 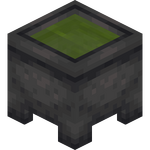 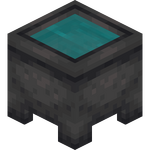 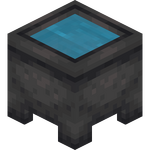 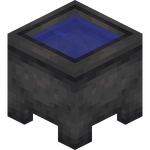 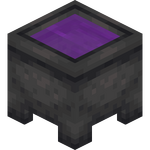 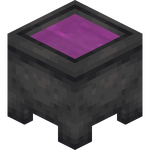 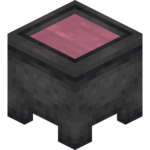 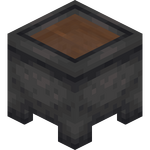 Cauldron filled with water with different color‌[BE only]

Since In Bedrock Edition, leather armor is dyed through a cauldron, a cauldron can hold dyed water. Using a dye on a cauldron filled with water colors the water, consuming the dye. Different dyes may be added to produce mixed colors. Using leather armor or leather horse armor on the cauldron dyes that item the color of the water, reducing the water in the cauldron by one level for each item dyed.

Attempting to add water or potion to dyed water empties the cauldron.

Lava inside a cauldron does not interact with water outside of the cauldron. The lava disappears upon putting water in the cauldron.

A redstone comparator with a lava cauldron behind it outputs redstone signal strength of 1 ‌in Java Edition 1.17‌[upcoming][3] or 3 in Bedrock and Education editions.[4]

A cauldron placed below a down-facing pointed dripstone that has lava placed a block above it will slowly fill up with lava.

A cauldron filled with powder snow with different level.‌[upcoming: JE 1.17]

Powder snow is currently the only solid material which can be stored in a cauldron. A cauldron slowly fills with powder snow during snowfall, if starting empty or with layers of powder snow already inside. Up to three layers can be filled. When the cauldron is full, interacting using a bucket, will create a powder snow bucket and empty the cauldron. Entities standing in the cauldron will not take freeze damage, and entities wearing leather boots will still fall through the powder snow.

A redstone comparator with a powder snow cauldron behind it outputs a redstone signal strength proportional to the fill level, up to 3.

Contrary to a cauldron filled with water, a powder snow cauldron, which is not full, cannot be filled up with a powder snow bucket, using the bucket on the cauldron instead places powder snow against it.

Cauldron filled with different type of potion‌[BE only]

Using an arrow on a cauldron that has potion transforms the arrow into a tipped arrow with that potion effect, and reduce the potion in the cauldron by one level. Tipping multiple arrows at once can be more efficient, and it may use more than one level at once. 1 level of potion tips up to 16 arrows, 2 levels up to 32, and a full cauldron can tip a full stack of arrows, resulting in 21.33 tipped arrows per potion.

Attempting to put water or a different potion into a cauldron with a potion causes an explosion sound, and the cauldron is emptied.

An entity that stands in a cauldron filled to any level with any potion does not receive the effect of the potion.

A cauldron can act as a power source for a redstone comparator. With a cauldron behind it (either directly, or separated by an unpowered solid block), a comparator outputs a signal strength proportional to how full the cauldron is: 0 for empty, 1 for one-third full or filled with lava‌[upcoming: JE 1.17], 2 for two-thirds full, and 3 for completely full. However, if there is a block between the cauldron and the comparator, the comparator does not immediately update.

As a profession block[edit]

If a village has a cauldron that has not been claimed by a villager, any villager that does not already have a profession or job site block may change their profession to leatherworker.

This page would benefit from the addition of more sounds.
Please remove this notice once you've added suitable sounds to the article. The specific instructions are: all interaction sounds, e.g. bottle filling

In Bedrock Edition, cauldrons use the following data values:

In Bedrock Edition, a cauldron has a block entity associated with it that holds additional data about the block.

Issues relating to "Cauldron" are maintained on the bug tracker. Report issues there.