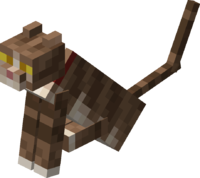 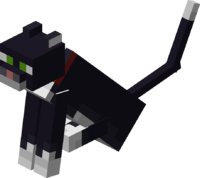 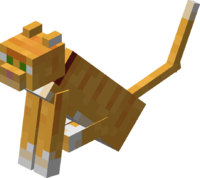 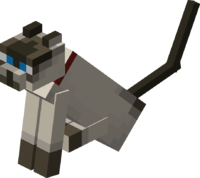 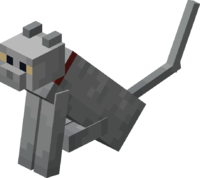 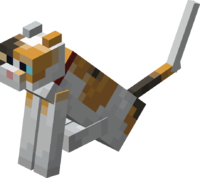 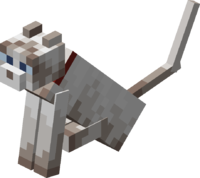 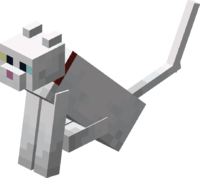 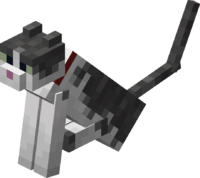 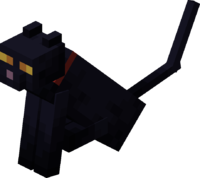 Cats are tameable passive mobs that are found in villages.

One untamed black cat generates along with a witch inside swamp huts upon world generation. This cat never despawns.

Like other baby animals, killing a kitten yields no items or experience.

Cats can still see players even with the Invisibility status effect.

With the exception of a faster pace, kittens obey the same behavior as adults.

Cats and kittens can drown in water if there is no way out. If a tamed cat or kitten is in water with no escape, a player can run away. The pet will then teleport to its owner and not drown.

Stray cats pursue and attack chickens‌[JE only], rabbits and baby turtles up to a distance of 15 blocks.

Stray cats avoid being 8 blocks or nearer from any player (unless they are sneaking‌[BE only]). If a player holds a raw cod or salmon, the stray cat slowly gets close enough to feed it, taming the cat (see § Taming below).

Stray cats can not be leashed. 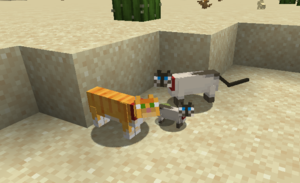 When tamed cats are fed an uncooked cod or salmon, they enter love mode. Breeding creates a kitten, and the parents cannot breed again for 5 minutes. The kitten has the colouring of and belongs to the owner of one of the parents. Two sitting cats are unable to breed, but a mobile cat can breed with a sitting cat, in which case the mobile cat's owner also owns the kitten. 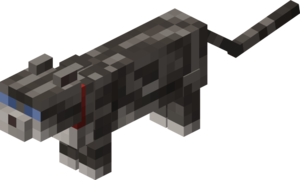 Despite sharing the same model, cats are smaller than ocelots. There are currently 22 skins (11 cat skins for adult, 11 cat skins for baby) that cats can have, with one being Jellie, the cat of YouTuber GoodTimesWithScar, who was chosen by the community in a Twitter vote.[2] The current skins are:

In the default resource pack, a texture file for a tamed gray tabby exists.‌[BE only][1] It is however completely unused and can't be spawned in-game. 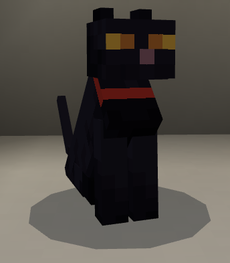 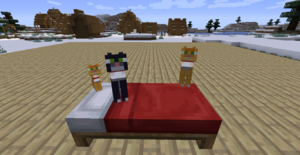 Cats sitting on a red bed.

A cat not already sitting attempts to get on top of chests, the foot part of beds, or active furnaces at the cat's current Y-level within a 4-block-radius square horizontally, and once on top often assumes a sitting position without a command from the player. A cat also occasionally attempts to sit on these blocks if the blocks are at ground level. A chest with a cat sitting on top of it becomes unusable unless the cat is commanded to stand. Cats often enter nearby boats, trapping themselves. Cats that sit on their own can be ordered to stand, or they may get up if the player holds a raw fish nearby. The cat can also be brought down by removing the block or pushing it off. A cat can also be forcibly moved by attacking it. A cat does not sit on a block that is obstructed by another block above it.

Cats have entity data associated with them that contain various properties of the mob.