From Minecraft Wiki
(Redirected from Carrot on a stick)
Jump to: navigation, search
Carrot on a Stick 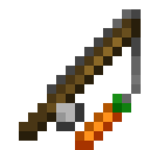 A carrot on a stick is an item that can be used to control saddled pigs.

It is possible to craft a carrot on a stick without a crafting table.

The speed of a mounted pig is 2.42 m/s. Boosting a pig causes its speed to slowly ramp up until it reaches 2.15 times it's normal speed, 5.20 m/s. Then speed slowly declines until the pig reaches normal speed again. The boost lasts between 140 and 980 game ticks (7 seconds and 49 seconds respectively), chosen randomly. No matter how many ticks the boost lasts, the average speed of pig during a full boost cycle is roughly 4.19 m/s. These boosted speeds are applied only while holding the carrot on a stick. These speeds are affected by the speed effect.

A carrot on a stick can receive the following enchantments, but only through an anvil:

Issues relating to "Carrot on a Stick" are maintained on the bug tracker. Report issues there.