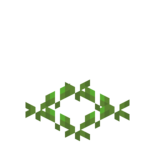 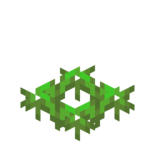 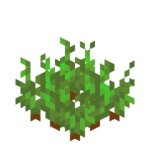 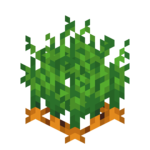 This article is about the natural food item. For the more valuable food, see Golden Carrot. For the item used to control saddled pigs, see Carrot on a Stick.

A carrot is a food item that can be eaten by the player.

Village farm plots have a 20% chance of having carrots.

Zombies, husks, and zombie villagers have a 2.5% chance of dropping either an iron ingot, carrot, or potato when killed by a player or tamed wolf. This is increased by 1% per level of looting. This gives carrots the following chances of dropping:

To eat a carrot, press and hold use while the carrot is selected in the hotbar. Eating a carrot restores 3 (

Carrots can be farmed and harvested on farmland. Planted carrots take 8 stages to grow, and go through 4 visually distinct stages. Mature carrot crops drop 1 to 5 carrots (about 3 per crop harvested on average). Bone meal can be used on carrots. Using a tool enchanted with fortune increases the maximum number of carrots dropped by 1 per level.

Villager farmers break fully grown carrots, and may pick up the carrots also.

Rabbits find and eat carrot crops, decreasing its growth stage by 1. The crops do not drop any carrots when eaten.

Carrots can also be used to breed and attract pigs and rabbits.

Novice-level Farmer villagers have a 25%‌[Bedrock Edition only] or 40%‌[Java Edition only] chance to buy 22 carrots for an emerald.

Placing a carrot into a composter has a 65% chance of raising the compost level by 1.

In Bedrock Edition, carrots use the following data values:

Issues relating to "Carrot" are maintained on the bug tracker. Report issues there.