Capes are rare vanity items and are worn in addition to the player's skin. They also change the appearance of worn elytra.

There is currently no way to obtain a cape on one's own in Java Edition, although there are various mods like Optifine that allow players to obtain one, only visible to that player (or in some cases, other users of that mod). Only capes listed in this article are official.

MINECON capes before Minecon Earth 2017 were obtained by attending or buying a ticket to the year's MINECON. Minecraft events from 2017 and onward are done via livestream. A cape celebrating Minecon Live 2019 was available in Bedrock Edition to promote the character customizer, though it was not a reward for those who watched the event.

In Bedrock Edition of the game, some skins from various skin packs include capes.

Players of Java Edition who have one or more official capes can choose which to wear (including no cape) by going to their Minecraft profile.

Players of Bedrock Edition can equip or unequip certain capes for their skin via the Character Creator.

On May 12, 2020, Mojang has disabled all unused MINECON Cape codes; it is unknown whether this also affected Cobalt and Scrolls cape codes.

On October 21, 2020, Mojang announced that all Mojang accounts will be migrated to Microsoft accounts and will receive a cape.[1]

These capes are available for your Xbox 360 Avatar as additional cosmetic item.

These capes were featured in a poll where MINECON 2011 attendees could vote for their cape of choice. The red creeper cape won MINECON 2011, and the blue cape with the pickaxe was for MINECON 2012. These following capes are still unused though may appear in the future.[41] 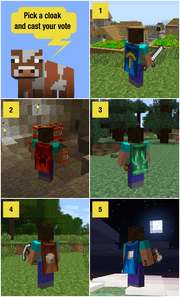 These capes are recreated and do not have original colors. The blue cape is the closest one to the original.

These capes are from Bedrock edition skin packs and are currently not used in any skin pack.

These capes have original colors. 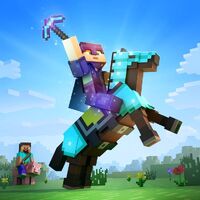 Minecraft has released this image with Alex riding a horse with unknown cape.