From Minecraft Wiki
Jump to: navigation, search
Not to be confused with Pumpkin Pie.
Cake 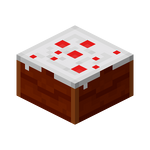 Cake is a food block that can be eaten by the player. Candle cake is a light-producing variation created when a candle is used on an uneaten cake

Once the cake is placed, it cannot be recollected even with the use of Silk Touch. Candle cakes always drop their respective candle when broken.

Expert-level farmer villagers can sell cake for a single emerald each.

Unlike most food, cake cannot be eaten as an item in the hotbar. Before being eaten, it must first be placed on top of a solid block.

Each cake has seven "slices"; each use consumes one slice progressing inward from the west. A single slice restores 2 (

) hunger and 0.4 hunger saturation. Eating all seven slices of a cake restores 14 (

Since eating a cake comes with no animation, cake can be eaten at a rate of one slice per tick. Multiple players can eat from the same cake at the same time. In Java Edition, eating cake makes no sound, unlike other foods.

Some pandas move toward a dropped cake to pick up and eat it. Some may not, depending on the cake's location.

Placing a cake into a composter raises the compost level by 1.

A candle cake created by placing a candle on an uneaten cake.

Using a candle on an uneaten cake creates a candle cake of that color (including uncolored). Eating the cake causes the candle to drop. Clicking on a cake again while sneaking or with full hunger bar should remove the candle from the cake, but it currently duplicates the candle.[1]

Using flint and steel, fire charge, or any flaming projectile on an unlit candle cake lights its candle. Lit candle cakes emit light level of 3. Clicking on the lit candle (but not the cake) extinguishes it.

This page would benefit from the addition of more sounds.
Please remove this notice once you've added suitable sounds to the article. The specific instructions are: bedrock: Sound when eaten

This section is missing information about MC-45375.
Please expand the section to include this information. Further details may exist on the talk page.

Issues relating to "Cake" are maintained on the bug tracker. Report issues there.