Image for "Buzzy Bees" for Java Edition released by Mojang 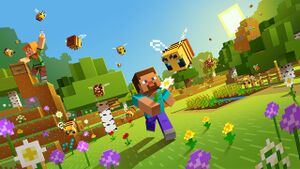 Official artwork released by Mojang for the Buzzy Bees update

Buzzy Bees is a major update, mainly focused on bees and the items relating to them, as well as also fixing bugs from previous versions. The update was released on December 10, 2019, only for the Java and Bedrock editions of Minecraft.[1][2]

It was released on Bedrock Edition as version 1.14.0.

The official name for the update, Buzzy Bees was revealed on November 21, 2019, in a blog post on Minecraft.net.[4]

A trailer for the update was released on December 11, 2019. Similarly, this trailer was made by Mojang themselves instead of Hat Films, similar to the 4 previous trailers.