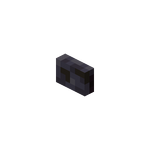 It can also be attached to the top of a fence in Bedrock Edition.

Wooden buttons can be used as a fuel source in furnaces, smelting 0.5 items per button.‌[Java Edition only]

This section needs expansion with:
when the pitch of the sound of the button being pressed in was changed in Java Edition.
You can help by adding to it.
This section is missing information about MC-8522.
Please expand the section to include this information. Further details may exist on the talk page.