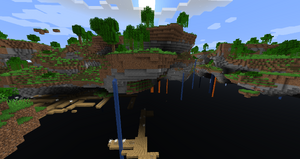 A jungle edge biome created in a Floating Islands world. 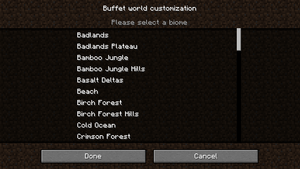 The customization screen for Buffet.

Buffet is world types in which the entire Overworld consists of one biome, including Single Biome, Caves, and Floating Islands. They are considered a substitute for the customized world type. By comparison, the Buffet world types are simple to customize.

There are three world types as parts of Buffet:

Buffet world types allow the player to choose a biome that the world uses in generating terrain of Overworld. Biome choice determines things such as terrain, vegetation, generated structures (if applicable), and to some extent, mob spawning. Buffet worlds can be customized to use any one of the available biomes and use only that particular biome for the entire world. The player can choose any of the existing biomes, including technical biomes (such as different End island types and Mutant biomes) and biomes that do not generate naturally.