From Minecraft Wiki
Jump to: navigation, search
This article is about the crafted block. For the item, see Brick. For other uses, see Brick (disambiguation).
Bricks 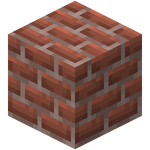 Bricks[a] are a decorative building block.

Bricks naturally generate in underwater ruins, and in some plains village houses.

Bricks can be mined using any pickaxe. If mined without a pickaxe, it drops nothing.

Bricks have the same blast resistance as other stone-based blocks, so it can be used as a durable building block.

Bricks can be placed under note blocks to produce "bass drum" sound.

Issues relating to "Bricks" are maintained on the bug tracker. Report issues there.