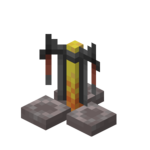 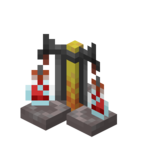 A brewing stand is a block used for brewing potions, splash potions and lingering potions. It is a cleric's job site block generated in village churches.

Brewing stands can be mined using any pickaxe. If mined without a pickaxe, it drops nothing.

Brewing stands generate in end ships. They have two Instant Health II potions in their holders.

A brewing stand also generates in the basement of igloos with a splash potion of Weakness in it.

Brewing stands can generate without potions in village churches. 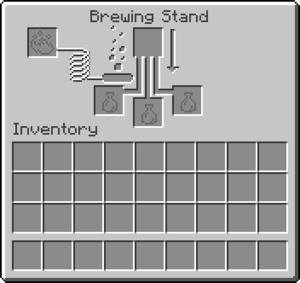 Brewing stands cannot be pushed by pistons in Java Edition.

By default, the GUI of a brewing stand is labeled "Brewing Stand," but this name can be customized by naming it in an anvil before placing it.

The main purpose of brewing stands is to allow for the brewing of potions. Its interface can be opened by pressing use on them.

Brewing stands need blaze powder as fuel. Each piece brews 20 batches of potions. Unlike furnaces there is no time limit for when the 20 batches are brewed.

If a village has a brewing stand that has not been claimed by a villager, any villager who hasn't already picked a job site block in the village has a chance to change their profession into cleric.

In Bedrock Edition, brewing stands use data values to determine what slots are filled.

A brewing stand has a block entity associated with it that holds additional data about the block.

Issues relating to "Brewing Stand" are maintained on the bug tracker. Report issues there.