For a guide about all the additions and changes in this update, see Java Edition guides/Bountiful Update. 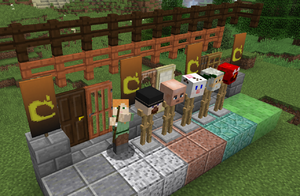 Image for the Bountiful Update released by Mojang

The Bountiful Update is the name for Java Edition version 1.8, a major update that was released on September 2, 2014. The update has two main themes, one being features added for mapmakers and the other being new survival features.

Development began the month after 1.7.4 was released. Fifty-two development snapshots were released, from 14w02a to 14w34d – the second most for any major update to date. During a long development period – 236 days long – six subsequent versions of 1.7 were released. The time between releases of 1.7.2 and 1.8 is the second longest time span between major updates, at 312 days. That is over a month longer than the development of Infdev and Alpha combined, and slightly over 2 weeks shorter than the development of Beta. Several iterations of the launcher were also released during this period, from 1.3.9 to 1.5.3.

The official name for the update, the Bountiful Update,[1] was announced on August 22, 2014 in a blog post on the Mojang website.