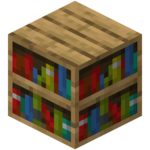 Bookshelves are blocks that primarily serve to enhance enchanting with an enchantment table.

Novice-level librarian villagers have a 50% chance to sell a bookshelf for 6 emeralds as part of their trades.‌[Bedrock Edition only]

Novice-level librarian villagers have a 2⁄3 chance to sell 3 bookshelves for 6 emeralds.‌[Java Edition only]

Librarian villagers can interact with bookshelves.‌[Bedrock and Java editions only]