From Minecraft Wiki
Jump to: navigation, search
This article is about the mineral block. For the ore, see Gold Ore. For the item, see Gold Ingot. For the nugget, see Gold Nugget.
Block of Gold 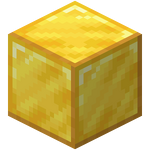 A block of gold is a precious metal block equivalent to nine gold ingots.

Blocks of gold generate as part of ruined portals and bastion remnants in varying quantities.

Blocks of gold can be mined only with an iron pickaxe or better.

Blocks of gold are a compact way to store gold ingots.

Blocks of gold can be used to "power" a beacon. The beacon can be powered by a 3×3 square of gold blocks underneath it, and can optionally also include a 5×5, 7×7 and 9×9 layer in the shape of a pyramid under the original layer to increase the effects from the beacon. The layers do not have to be entirely gold blocks, as they may also contain blocks of iron, blocks of emerald, blocks of netherite, and blocks of diamond.

Blocks of gold can be placed under note blocks to produce bell sounds.

Issues relating to "Block of Gold" are maintained on the bug tracker. Report issues there.

Cite error: <ref> tags exist for a group named "note", but no corresponding <references group="note"/> tag was found, or a closing </ref> is missing