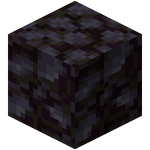 Blackstone is a dark-colored block which functions similarly to cobblestone. It can be found only in the Nether.

Blackstone generates naturally in the basalt deltas biome found in the Nether and anywhere underground.

Blackstone can be found as a part of bastion remnants.

Veins of blackstone attempt to replace netherrack 2 times per chunk in veins of size 1 to 33, from levels 5 to 28, in all Nether biomes except basalt deltas.

Piglins may barter 8–16 blackstone when given a gold ingot.

Issues relating to "Blackstone" are maintained on the bug tracker. Report issues there.