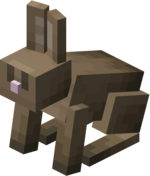 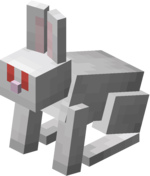 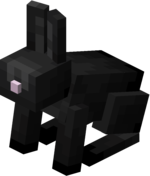 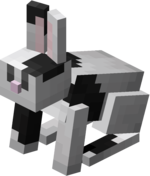 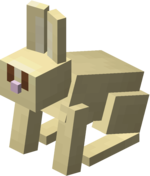 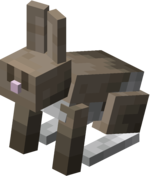 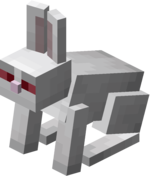 This article is about the mob. For other uses, see Rabbit (disambiguation).

Rabbits (also known as Bunnies) are rare passive mobs. They are a source of rabbit's foot and rabbit hide, as well as raw rabbit meat.

Rabbits spawn rarely, in groups of 2-3 (1 adult and 1 to 2 kits) in deserts, flower forests, taigas, giant tree taigas, snowy taigas, snowy tundras, snowy beaches and frozen rivers. They have different skins that depend on the biome.

In Bedrock Edition, rabbits spawn at light level 7 or higher in groups of 2-4 if in Flower Forests and 2-3 in others, which include old frozen oceans. 25% of them spawn as babies naturally or via spawn egg.

In taigas, wolves and foxes are found. If left alone, these may quickly kill rabbits, so rabbits are generally more plentiful in the desert and icy biomes.

Killer bunnies do not spawn naturally, and must instead be spawned using the /summon command, though they are exclusive to Java Edition.

When killed, an adult rabbit drops:

Rabbits hop around aimlessly instead of walking. They slowly approach players holding carrots or dandelions within 8 blocks. Rabbits also jump off of cliffs to reach carrots but do not go into lava for them. They randomly flee around if attacked. All non-hostile rabbits avoid players within 8 blocks and avoid most hostile mobs within 4 blocks (except slimes, magma cubes, and ghasts). They also avoid wolves within 10 blocks.

Wild wolves, foxes, and stray cats track down and kill any rabbits.

In Bedrock Edition rabbits do not hop and baby rabbits follow adult rabbits.

Rabbits can be bred with carrots, golden carrots or dandelions.

Baby rabbits usually inherit the same type of fur as one of the parents (47.5% chance of each), but there is a 5% chance for the baby to have the fur type matching the current biome. Baby rabbits grow to adulthood after 20 minutes, although its growth can be slowly accelerated using carrots; each use reduces 10% of the remaining time to grow up.

Despite its hostile nature, killer bunnies can breed with other rabbits and with each other, having the usual chance of creating a baby killer bunny.

There are two special variants of rabbits: 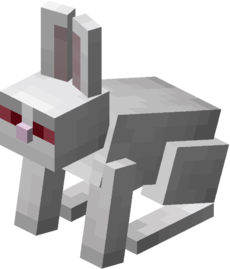 The killer bunny (previously known as the killer rabbit of caerbannog, a reference to Monty Python and the Holy Grail) is an aggressive variant of the rabbit exclusive to Java Edition that is hostile to all players. Its fur is pure white with blood-red eyes that are horizontal, compared to a normal rabbit's vertical eyes. It can be spawned only by using the /summon rabbit ~ ~ ~ {RabbitType:99} command. It appears with a nameplate over its head reading "The Killer Bunny".

If the killer bunny finds any player within a 16-block radius, it hops quickly toward the player, much faster than a normal rabbit. It moves in a style similar to that of a spider. Once it closes in, it jumps at the player, dealing 8

damage on Normal difficulty. If the player strikes at the killer bunny, it runs away for a brief moment, then returns to lunging at the player. Killer bunnies are immune to the Thorns enchantment.

If it cannot find a player, the killer bunny actively seeks out and attack any foxes or wolves as well, including tamed wolves. These wolves, in turn, attack the killer bunny, leading to a vicious fight.

On peaceful difficulty, the killer bunny does not despawn, despite its hostile nature. It still attacks wolves and tamed wolves, but not the player. 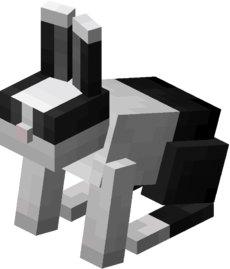 Naming a rabbit Toast (using either a name tag or a renamed spawn egg) re-textures it to have the appearance of a black dutch, with a large black and white patch and more black fur around the face than the natural black and white spotted rabbit. Other than its name and skin, Toast behaves exactly like it would if it were unnamed. When Toast rabbits are bred, whether with each other or with regular rabbits, their offspring do not have the Toast pattern; they have a pattern consistent with the parents' original coloring prior to renaming. If the player renames a killer bunny to Toast, it still attacks players and wolves. Like the killer bunny, Toast does not spawn naturally.

This rabbit is the skin of user xyzen420's girlfriend's missing rabbit, which Ryan Holtz implemented as a memorial.[2]

Rabbits have entity data associated with them that contain various properties.

Note: this video is outdated as rabbits can no longer be tamed, rabbits are smaller now, and the killer rabbit is now called the killer bunny.

Issues relating to "Rabbit" are maintained on the bug tracker. Report issues there.