From Minecraft Wiki
(Redirected from Biomes)
Jump to: navigation, search 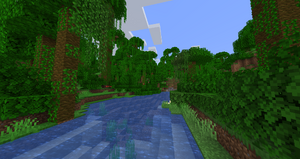 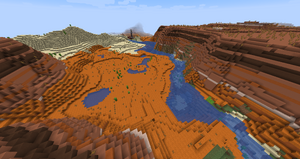 A river running through a badlands plateau or “Mesa” biome, with a savanna biome in the bottom right. 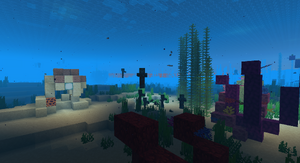 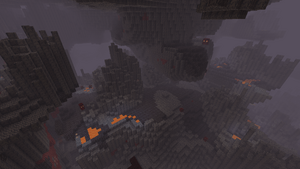 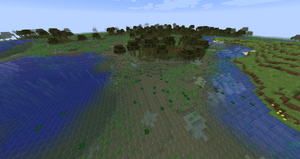 Biomes have a temperature value that determines if it snows, rains, or does not have either kind of precipitation. The required temperature values are less than 0.15 for snow, 0.15 – 0.95 for rain, or at least 1 for neither. The temperature also drops 0.0016 (1⁄625) per meter above the default sea level (Y=64), but does not change below sea level. These values can be used to determine the heights that snow generates at in different biomes. For example, mountains generate snow at Y=95, due to their highland climate, as their temperature value is 0.2. The temperature affects only the transition from rain to snowfall. Dry biomes do not transition to rainy ones under any circumstance. For example, savannas do not experience rain or snow due to their heat.

While biomes are still split into 5 categories, generation of biomes between 1.7 and the current version differs somewhat from the biome categories described below. In general, land biomes generate in 4 different clusters; cold, temperate, lush, and hot biomes. Temperate and Lush biome groups are often indistinguishable from each other however, with the only difference being areas of taiga versus areas of swamps, birch, and dark forests. The former two biome clusters are often the most expansive. Cold and dry biomes generate in smaller clusters, but can still extend a thousand or more blocks. Cold biomes include the snow-covered Snowy Tundra and Snowy Taiga. Dry biomes consist of Savanna, Plains, and Desert. Plains biomes are somewhat unusual in that they generate in dry biome clusters in addition to lush and temperate biome clusters. Temperate and Lush biome clusters both contain Extreme Hills, Plains, and Forest.

Snowy, temperate, lush, and dry biome clusters, as well as Mushroom Fields, Jungles, Giant Tree Taigas, Oceans and Deep Oceans, are generated and pre-determined in the biome climate stage of biome generation. The biome clusters then generate their respective biomes.

Four land biomes are rarer, and generate separately from biome clusters: Mushroom Fields, Badlands, Jungles, and Giant Tree Taigas. Mushroom Fields generate in Ocean biomes, Badlands in dry biomes, Jungle in lush biomes, and Giant Tree Taiga in temperate biomes. These three land biomes may also occasionally generate standalone separate from their parent biome clusters. In addition, an "edge" variant biome surrounds these three biomes. Jungle Edges separate Jungles from most other land biomes aside from regular Forest or Taiga (if bordering a Swamp the Jungle edge extends up to 3 chunks), and Desert separates Badlands from the rest of the land biomes except with Modified Badlands. Taiga and its variants surround Giant Tree Taiga in all cases except for Snowy Taiga. The thin Deserts and Jungle Edges that border much of Mesa and Jungle biomes are generated in the beach/shore biome stage. The generation of Mushroom Fields uses Mushroom Fields Shore as its "technical" river biome and beach biome, but if a Deep Ocean touches a Mushroom Field biome then the Mushroom Field Shore biome does not generate.

The generation and location of Hill biomes is pre-determined, and mutated biomes have their own stage in biome generation. The dense Dark Forest uses Plains as its Hill biome, forming glades. Plains generate groves of Forest, Forest Hills, or Flower Forest. Ocean biomes may have spots of Deep Ocean biomes within it, while Deep Ocean biomes generate sparse islands with Plains or Forest. Mushroom Fields that generate in Ocean biomes are pre-determined in the biome climate stage of biome generation. In the Badlands, the Badlands Plateau is the actual main biome generated with the regular badlands as the Hills biome. However, the non-plateaued badlands biome generates on the edges of all types of plateaued badlands, in this case of the non-plateaued badlands, this is generated in the biome-edge stage of biome generation. In the case of Modified Hills, if a biome type doesn't have a Modified Hills biome, such as warm ocean or Swampland, only the regular biome type generates. Since Update Aquatic, Modified biomes can conform to an entire biome or can border a river.

With Bedrock Edition using 32-bit seeds and a different world generation algorithm, there are few similarities between it and the 64-bit world generation. The positions of Mutated biomes, oceans (and islands), rare biomes (Jungles, Badlands, Mushroom Fields, Giant Tree Taiga), as well as specific biomes in cold, temperate, or dry biome clusters, bear some geographical relationship with the equivalent positive value seed of the 64-bit generation. The biome shapes deviate significantly. The specific generation of lush biomes is completely different on Bedrock. 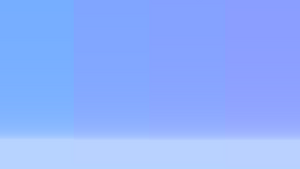 Depending on the climate zone, the sky has a different blue color: warm, temperate, cold, or snowy.

In these biomes, it always snows instead of rains, no matter the height; all sources of water exposed to the sky are frozen over. The foliage and grass is aqua, and the water is purple.

[1]The End is considered a different dimension. The water is lilac.‌[Bedrock Edition only] 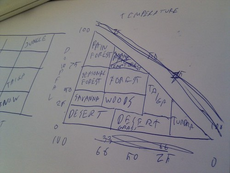 The biomes graph from Notch, prior to Java Edition Beta 1.8. Notice the chicken scratch handwriting, as Notch was working quick to try to get the biomes update out. 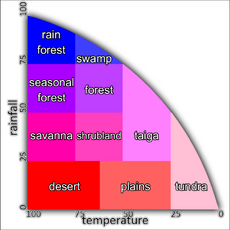