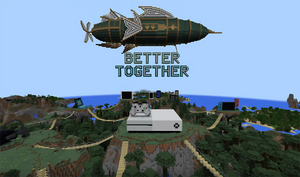 Image for the Better Together Update released by Mojang.

The Better Together Update is an update to Pocket Edition, Windows 10 Edition, Gear VR Edition, Fire TV Edition, and a new version of the Xbox One Edition, Nintendo Switch Edition and PlayStation 4 Edition. It was released for Pocket Edition as version 1.2.0, and as a new version for the Xbox One and Nintendo Switch. Eventually, Pocket Edition for Windows phones was discontinued after the official release of the Better Together Update on September 20, 2017. Beta testing for the update for Android & Windows 10 began on July 31, 2017 and an update for Xbox One began on August 17, 2017,[1] and it was submitted to certification for 9 of the 10 platforms on September 15, 2017. It was released on September 20, 2017 on all platforms except Nintendo Switch, which was delayed until June 21, 2018 when it was released for retail.[2][3] The update for the Xbox One Edition is free for gamers who own a digital copy or have played the disc version for at least 5 hours in the past 12 months or have bought at least one DLC. The legacy versions for the Nintendo Switch and Xbox One from the Legacy Console Edition no longer receive updates, and are no longer available to purchase.[4]

The official name for the update, Better Together Update, or also known as "1.2.0" merges the bedrock platforms under one title - "Minecraft", reflecting the addition of cross-platform compatibility between the Pocket Edition (Android/iOS only), Windows 10 Edition, Xbox One Edition, Gear VR Edition, and the Nintendo Switch Edition.[5] Later on, PS4 users got access to the Bedrock Edition.

With the release of the Better Together Update, the original PC version, which was officially named Minecraft but commonly called "the Java edition", has been renamed to Minecraft: Java Edition in 1.12.2 to distinguish it from the cross-platform version.[5]

Features ported from, or similar to, Java Edition[edit]