From Minecraft Wiki
Jump to: navigation, search
This article is about the block. For the note block instrument, see Note Block § Instruments.
Bell 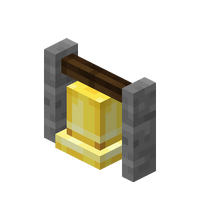 A bell is a transparent animated block entity that produces a sound when used.

Bells can generate naturally in all village variants, usually near the center of the village in the meeting point.

A bell requires a pickaxe to be mined or it drops nothing.

When a bell is placed near a claimed bed, the bell is claimed, which is displayed by green particles appearing above the bell. A claimed bell defines a gathering site of a village.

When the side of a bell is used, it produces a sound as well as a "swaying" animation. Bells can be rung using a redstone signal. In Java Edition, bells can also be rung by any damage-dealing projectile. In Bedrock Edition, they can be rung by any projectile by right clicking or dropping an item on it. Bells can be anchored to the side of blocks, ceilings, and floors. Also, if the player uses the bell while villagers are sleeping, all of the villagers wake up. Bells can be rung only from certain angles; trying from an incorrect angle does not cause the bell to ring.

Bells can also be used for bartering with piglins.

When rung, villagers run into their houses immediately as they do at sunset. The bell's functional volume for sending villagers to their home is a 31×31×31 cube with the bell at the center, giving an effective area of 961 blocks per plane or 29791 blocks in the affected volume. However, the audible range of the bell is shorter, and can be heard in a smaller volume of 29×29×29 (although to achieve this full range, multiple bells are required).

When a raid's first wave is spawning, In Java Edition at least one villager rushes to ring the bell in the center of the village (if they are close enough) to warn the other villagers of an incoming raid before going into their house. In Bedrock Edition bells in the corresponding village ring automatically at the start of a raid, warning villagers to return to their houses.

Additionally in Java Edition, if a bell is rung and there is a raid mob within a 32 block spherical range, the Glowing effect is applied to all raid mobs within 48 blocks, and particles appear. It produces a resonating sound once this process is complete.

Piglins admire bells as golden items. However, breaking a bell does not aggravate them.

A bell has a block entity associated with it that holds additional data about the block.

Issues relating to "Bell" are maintained on the bug tracker. Report issues there.