This article is about the mob. For other uses, see Bee (disambiguation).

Bees are neutral mobs that live in bee nests and beehives. If provoked, bees attack in a swarm to sting the player and inflict poison.

Oak and birch trees grown from saplings that are within 2 blocks of any flower have a 5% chance to grow with bee nest and 1–3 bees in it.‌[Java Edition only]‌[upcoming: BE 1.16.0]

Upon death, adult bees drop 1–3 orbs when killed by a player or tamed wolf.

Upon breeding successfully, 1–7 is dropped.

Like other baby animals, killing a baby bee yields no experience.

Bees do not fly (like ghasts or the ender dragon), but instead hover a few blocks above the ground similar to bats.

Bees are considered arthropods and take increased damage from the Bane of Arthropods enchantment.[1] They also take damage when touching water.

Bees can be attached to a lead, even when angered. They can still attack while attached.

Bees normally won't go further than 22 blocks from their beehive (Bee Nest) to find something they can pollinate or to attack someone.

Bees leave their nest one by one during the day. They fly around their nests, and are attracted by flowers and sweet berry bushes. After circling a flower or berry bush for about 30 seconds, a bee collects pollen. A bee carrying pollen changes its texture to include pollen spots on its back and drops pollen particles similar to water droplets falling.

Bees that have pollen pollinate wheat, potatoes, carrots, beetroots, melon stems, pumpkin stems and sweet berry bushes they fly over. When one of these plants gets pollinated, it advances to another growth stage, similar to using bone meal. In order to pollinate a plant, the particles that drop must touch it directly. A bee can fertilize plants 10 times each time they have pollen, and there is a small wait time between pollinating each plant.

Afterward, the bee flies back into its hive/nest and makes honey. It takes about 2 minutes for the bee to do this. That increases the amount of honey in a hive/nest by 1. When the amount reaches 5, honey starts dripping out, which you can see from the bottom and front of the hive/nest. A hive/nest must have 5 honey inside of it in order for you to be able to collect either honeycombs or honey bottles. 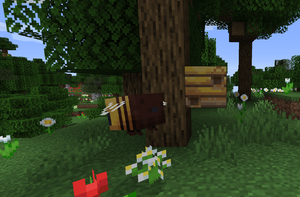 A bee coming out of a bee nest.
See also: Tutorials/Honey farming

Bees live together in colonies and take any beehive that has enough space as its home. One beehive can house up to 3 bees. Homeless bees wander around searching for empty beehives. Bees can enter a beehive from any side, but exit only from the front. One-way bee-gates can be made in this way.

Bees return to their nest when it rains and when it is night. Bees stay in their nest or hive for at least 2400 game ticks (2 minutes) before coming back out. Bees that come out keep their data (health, name, etc.).

Breaking a nest or hive that contains bees releases all the bees. If a bee nest containing bees is harvested using a tool enchanted with Silk Touch, the bees inside are kept, with their respective data, in the hive, and they can exit the hive again when it is placed.

All bees nearby are angered when an individual is attacked, honey is collected (unless a campfire is placed under a bees nest) or a beehive is destroyed. Hitting or walking on a nest does not anger bees; it must be destroyed to anger them. When destroyed, a beehive releases any bees that it contained, and these bees are angry. If the beehive is destroyed with a Silk Touch tool, bees outside the hive become angry ‌[Bedrock Edition only], while those kept within it remain neutral even after the hive is placed again.

Bees attack and swarm the player as a group when angered, and the eyes of angered bees turn red. Collecting a honeycomb or a honey bottle from a nest or hive causes the bees that are currently in that nest or hive to leave and swarm the player unless a campfire is placed below the hive; lighting any block on fire under a hive or nest also works. Bees do not attack in Peaceful difficulty.

If the player deflects a bee's attack with a shield, the bee continues attacking until it succeeds in hitting the player.

When a bee's attack on a player succeeds, the player is poisoned. A bee loses its stinger after a successful attack, and cannot attack further after it has lost its stinger. After losing its stinger, the bee dies in approximately one minute. This duration is not hardcoded into the game, so the death of bees can be delayed with potions (Regeneration/Resistance/Absorption) that have a 255 potency.

It is possible to (quickly) breed at least one angered bee with another, even if it or they had stung and lost the stinger. However, they remain angered and still die later due to being stingerless.

Bees also swarm and attack other mobs when damaged, for example, if a skeleton accidentally shoots a bee.

Bees will attach themselves to honey blocks, as if they are "eating" the block.

Bees follow players holding flowers. If the player is standing still and being followed by bees, the bees go toward the player, face the player, and rest on the ground. They do this until the player moves.

If bees are given a flower, they enter love mode and pair up to create baby bees, granting the player 1-7 experience. The parent bees have a cooldown of 5 minutes before they can breed again. Babies take 20 minutes (1 in-game day) to grow up. The growth of baby bees can be accelerated using flowers; each use reduces the remaining time by 10%. It should be noted, however, that both the breeding cooldown timer and the growing-up timer do not count down while bees are in a hive;[until JE 1.16] thus, bees that are not actively working may take much longer to grow up or be ready to breed compared to other mobs.

The flower can be any of the 1- or 2-block flowers. The wither rose, which is ordinarily harmful, has no harmful effect when used like this.

Bees have entity data associated with them that contains various properties of the mob.

Issues relating to "Bee" are maintained on the bug tracker. Report issues there.