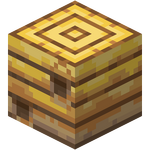 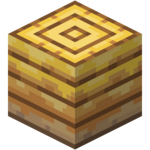 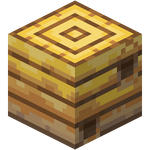 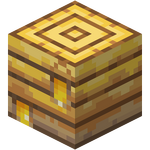 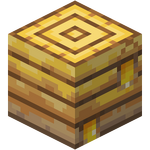 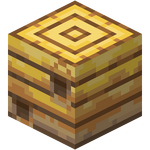 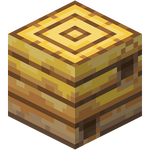 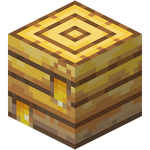 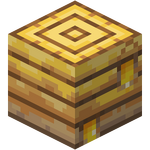 Bee nests are most commonly found in the flower forest biome because of its high tree and flower density.

Beehives and bee nests can be mined by any tool or by the player's fist, though they break faster with an axe.

If broken in Creative mode with bees inside, the bee hive or nest drops itself and bees inside remain inside.

Only beehives can be crafted in a crafting table. Bee nests occur naturally and cannot be crafted.

Oak or birch trees grown from saplings that are within 2 blocks of any flower on the same y-level have 5% chance to grow with a bee nest containing 1–3 bees.[more information needed]

Pollinated bees fly into beehives and start working for a while. When done, they exit the hive, increasing the honey level by 1. When the honey level has reached 5, the block's appearance changes, indicating that it is full of honey, and produces dripping honey particles if suspended above the ground. The dripping honey is decorative and the drops cannot be collected by a cauldron or other means. If an empty glass bottle is used on a full beehive, the bottle fills with honey, becoming a honey bottle. If shears are used on a full beehive, it drops three honeycombs. Unlike with shearing pumpkins, these honeycomb items are generated directly in the center of the block, causing them to spray everywhere;[1] however, this inconsistency is intended.[2] Harvesting honey or honeycomb causes any bees inside the hive to become aggravated toward the player. If there is a lit campfire within five blocks underneath the hive, without obstruction, or a fire directly underneath the hive, then harvesting the hive does not aggravate the bees inside. Using a dispenser with a glass bottle or shears via redstone to harvest the hive or nest also prevents the bees from attacking the player. 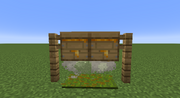 In Java Edition, the campfire can be placed below ground level with a carpet on top of it to prevent bees from taking fire damage from the campfire while hovering over it. The fire must be unobstructed otherwise the bees will attack the player.

Beehives and bee nests can be placed under note blocks to produce "bass" sound.

In Bedrock Edition, beehives and bee nests can be used as fuel in a furnace, smelting 1.5 items per block.