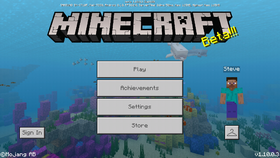 Beta 1.10.0.3 is the first beta version for Bedrock Edition 1.10.0, released on January 30, 2019,[1] which adds the wandering trader, illager beast, composters, stonecutters, campfires, lecterns, and the loom.