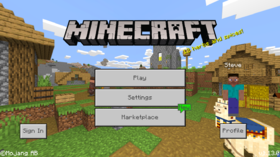 1.13.0 Additions
All new blocks and items, and spawn eggs for new entities.

For a guide about all content in this release and the other releases of 1.13, see Bedrock Edition guides/1.13 releases.

1.13.0 is a major update to Bedrock Edition released on October 29, 2019.[2] It focuses on adding several Village and Pillage features that were not included in previous updates, along with some other features, including a character creator, and makes even more improvements to map-making and commands.