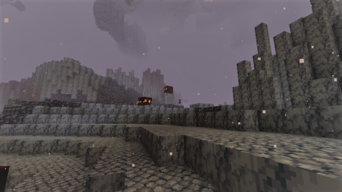 Basalt deltas are volcanic biomes in the Nether. Magma cubes, ghasts, and striders spawn naturally here. Blackstone and basalt generate commonly while gravel, magma blocks, and netherrack generate in the shore of mountains above the lava seas. White ash particles can be seen floating through the air while traveling through the biome, with a gray-purple fog. 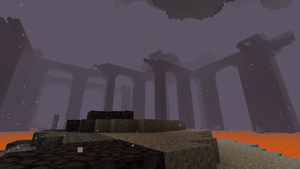 A fortress seen from the basalt deltas.

Basalt deltas are composed largely of basalt and blackstone mountains, with lava lakes and magma blocks generating throughout the biome. The blackstone is less common and tends to form relatively horizontal shelves and blobs. The fog is a very dull lilac. Small and large clusters of basalt columns of varying height can be found throughout the biome. Many of these are clustered in and /or along the main lava ocean, which like all 1.16 Nether biomes, tends to undercut its various levels.

The typical nether fortresses and caves filled with nether quartz ore will also cut through the biome. Unlike other nether biomes, bastion remnants do not generate here.

In survival mode, the basalt deltas are challenging biomes to navigate. This is due to the jagged terrain and many lava lakes which are often hidden from view. Magma cubes spawn most frequently in this biome, so survival players should plan accordingly.

Ores generate twice as frequently in this biome compared to others, due to the lower quantities of Netherrack.

These music tracks play while the player is in the Basalt Deltas.

Nether ambience plays while the player is in the Nether.

Issues relating to "Basalt Deltas" are maintained on the bug tracker. Report issues there.