A full set of armor consists of 24 units of a given material. A turtle shell is a helmet with no corresponding armor pieces. Despite there being chain items, chainmail armor cannot be crafted (in outdated versions of Minecraft you were able to craft chain armor with fire). Netherite armor only needs 4 units of Netherite ingots (16 netherite scraps and 16 gold ingots); to get netherite armor one must put a diamond armor piece and a netherite ingot in a smithing table.

Armor can be repaired by placing two pieces of the same type (e.g., iron helmets) in a grindstone or in the crafting grid. The resulting item has 5% more durability left than the original items combined if the total durability of both of the armor pieces is more than the total durability that a piece of armor will have fresh from a crafting table, but any enchantments are lost. Repairing armor with an anvil preserves and combines the enchantments, with a rising experience cost for subsequent repairs on the same item.

Leather boots, often badly damaged, can be obtained as a junk item from fishing.

More information on this can be seen in § Mechanics below.

The Turtle Shell is not part of a full set. However, its defense points match gold, chainmail and iron helmets, while its durability is between iron and diamond helmets (276). In the games code, it is equivalent to iron armor (in protection).

Mob heads can be worn in the helmet slot. They cut a player's detection range by 50% for the corresponding mob type ‌[JE only], a bonus that stacks with potions of Invisibility and sneaking.

In Java Edition, armor can further protect the player through a second attribute, generic.armor_toughness. Normally, armor nullifies a lesser portion of damage from attacks that deal greater damage. Armor toughness resists this effect, mitigating the power of strong attacks. By default, only diamond and netherite armor provide toughness, with each piece granting +2 toughness for diamond and +3 for netherite. 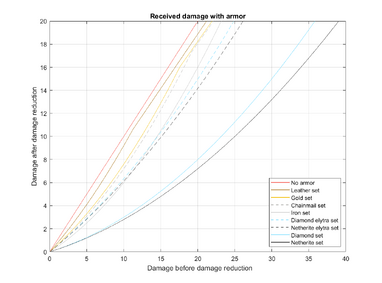 Note: Only one form of protection can be applied to a piece of armor (i.e. a chestplate cannot have both Fire Protection and Blast Protection, unless using commands to get all protection enchants in one piece of armor). Feather Falling, Frost Walker, Depth Strider and Soul Speed are enchantments applicable only to boots. Respiration and Aqua Affinity are enchantments applicable only to helmets.

These mobs can have armor equipped on them via dispensers, but do not pick up armor:

It has been suggested that this section be split. Do not split sections until a consensus has been reached. [discuss]
Reason: Split history into Helmet, Chestplate, Leggings and Boots.